Working from home: Day 60. Yee-Haw! - A photo series taken during the lockdown of COVID-19. 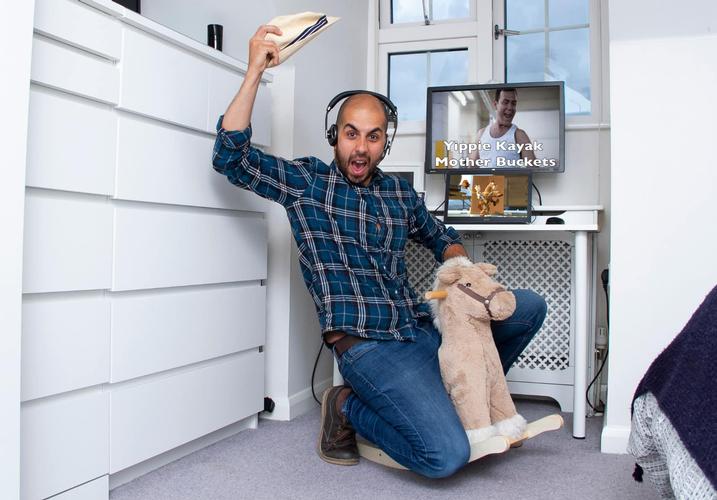 The reason I chose to take this photo is because my partner and I were chuckling about an old memory we had where my son was scared to be up on stage for his first ever Nativity play at nursery and was desperate for me to join him so I ended up on stage with him on my lap whilst he was dressed up as a horse and I, fresh from work, sat with him and about 15 other children in my work clothes (smart shirt etc). I ended up doing the whole play with a 'horse' on my lap and I was joining in on the songs, singing my heart out!

I could have squeezed into the horse costume that my son used at his nativity a few years ago but instead I thought I'd try and actually find other methods of getting the point across so I used this rocking horse that my youngest likes to climb and balance on and of course his sun hat too!

For the memes, I put the iconic scene in Toy Story where woody yells "Ride like the wind, Bullseye!" but also something for the older generation, a scene in one of my favourite shows, Brooklyn Nine-Nine where Charles Boyle tries to reenact a Die Hard movie but instead of the well known phrase, he says 'Yipee Kayak Mother Buckets'. I cry with laughter every single time I watch that episode.