Working from home: Day 71. Kraken Good Meme - A photo series taken during the lockdown of COVID-19. 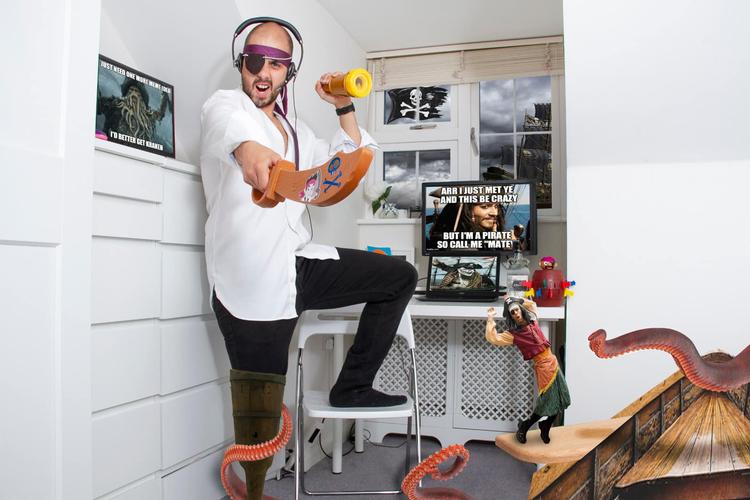 Over the weekend it dawned on me that I have so little picture ideas left but I have been doing this over 70 working days and I won't be defeated! So I reached out to my future parents and my in law and before lockdown my children used to be looked after by them a few times a week so I knew how many toys they had in their home so I asked them to grab a few bits for me, I disinfected them thoroughly and used them for my picture.

I didn't have too many pirate themed items aside from the toys that I borrowed (sword, Pop Up Pirate and telescope) but these photographs are about being slightly imaginative and attempting to make some edits where possible and as I'm near the end of this Working From Home journey, I thought I'd spend a bit of time making some edits.

Right, this image took a little effort as you may imagine but it was funny to say the very least. To give this picture a bit more substance than me staring at the camera like a plonker, I added a fair few bits. I made an eye patch and brought out my iced bottle of Kraken Rum and then it got me thinking, why not add a Kraken to the picture!

I edited in a little boat and used a piece of wood that was in my house to act as a plank and thought I'd edit someone on there.

Before I added the tentacles around the lower part of the picture I added in a peg leg to make it as clear as possible of the idea I was looking to achieve.

I like to edit things outside of the window when it suits so I added a pirate flag and a ship in the background but added a dark and moody sky to contrast to the bright image of my 'set' (dare I call it that without sounding really snooty).