The Secret Is Out! This Is My True Identity

Working from home: Day 74. The Secret Is Out! This Is My True Identity- A photo series taken during the lockdown of COVID-19. 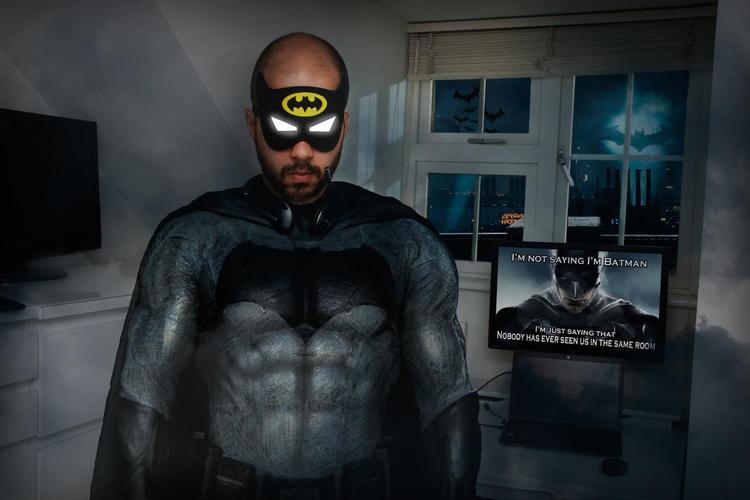 As I finished my working day today, I have to prepare to going back into the office and this picture is my last one.

Working from home has had some drawbacks and it has been somewhat tough at times in the earlier days but as the weeks go by, I have found myself getting into the swing of things and getting into a routine but from a work perspective, nothing really beats going into the office and speaking with your colleagues in person and having more natural conversations.

So today’s final picture, is where my true identity is revealed – I’m Batman!
I took this photograph last night and edited it then too as I wanted to spend some time with my kids on my last lunch break from home as it’s has been quite tough balancing this out whilst putting still putting my family first.

This image started off just normal high key lighting that I usually produce and I only wore a long-sleeved black top but when I opened it up, ideas started flowing through so I decided to put them within the image.

I added Batman’s body on top of mine but accentuated the abs and let my headset be slightly seen. I added some smoke and fog inside of my room and added an iconic Bat signal amongst a cityscape and then added some fake bat silhouettes there too to balance the outside image out somewhat.

I made some minor tweaks too such as the light casting on the window and gave it some of that cyan tone to it and gave my eyes some glowing lights as per the newest Batman movies.

I genuinely want to thank everyone that either helped giving me ideas or support and obviously my family for putting up with my silliness for the last 3 months as I worked on these during lunch breaks, evenings and weekends to get these right.