Working from home: Day 42. Mental Health Awareness Week - Board Games - A photo series taken during the lockdown of COVID-19. 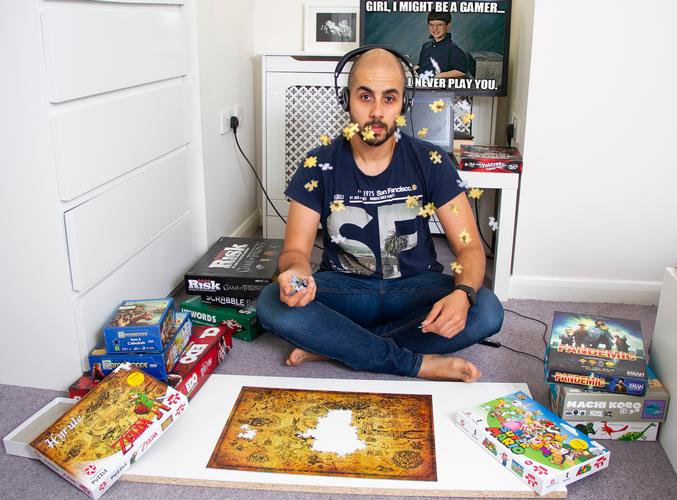 This week is Mental Health Awareness Week. Something that is incredibly close to my heart and something I actively support so this week's set of pictures relate to things that help me when I need it.

Board Games and Puzzles. One of the things I like to do is play a board game with my partner and/or son whilst some music plays in the background. It doesn't always need to be heavily competitive games like Monopoly but sometimes something nice and easy like Machi Koro, Yahtzee or even if it's something on my own like a puzzle.
Speaking of puzzles, I've only ever done one puzzle and that's the one you can see in the picture. It's a Zelda (one of the best game series ever!) puzzle. It's only 500 pieces but good God, it took me 14 hours, 56 minutes and 43 seconds...
I know, it's ages but look closely at the puzzle. There are no defined lines, everything is the same colour, the language isn't real so it's not recognisable. It was an extremely difficult one to start with but I loved it and it really took my mind off of things in general.

For this picture, it was quite easy. I just laid out all of my puzzle and board games out and on my completed puzzle, I grabbed a handful of pieces and threw them in the air and snapped a picture on a timer. In the end, I had to Photoshop a few more pieces in the air because of the way some of them were shot.