Working from home: Day 30. The New Tiger King - A photo series taken during the lockdown of COVID-19. 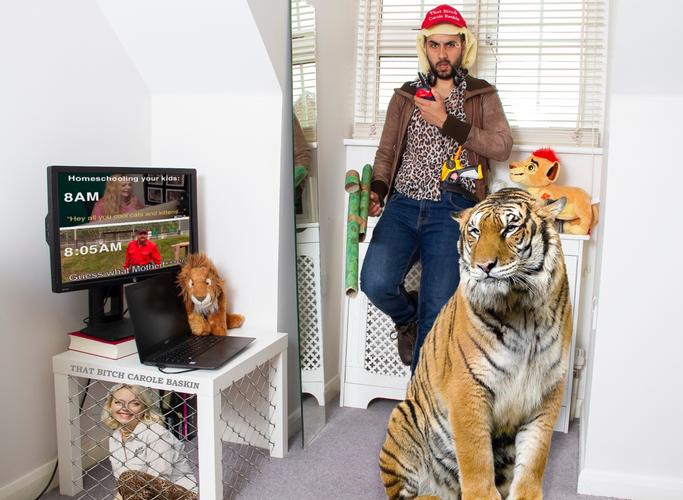 Working from home day 30. TIGER KING. Did you watch it? What are your thoughts about Carole Baskin and her previous husband? Do you think she did it? What about Joe Exotic's husbands? Do you think Joe Exotic actually planned it?

This picture came about because I had just finished watching all the episodes in the latest docu-series and a day later, my partner and I were completely getting rid of all the clothes that had been in the back of our cupboards since before we had kids and we were at uni and I stumbled across her leopard print blouse. I put that on, the same hat as I used in the 'Make 'Murica Clean Again' picture and edited the picture and even reused the same self-made weapon from my 'Saving Private Fabio' picture too.

It couldn't be Tiger King if I didn't add a picture of Carole Baskin and a tiger so I did that but added some chain-linked fencing around Carole.

I cut up an old jumper and Photoshopped it a tad blonde and used it as my mullet and added a fake little eyebrow piercing to match the real Joe Exotic.