Working from home: Day 46. Bookworm- A photo series taken during the lockdown of COVID-19. 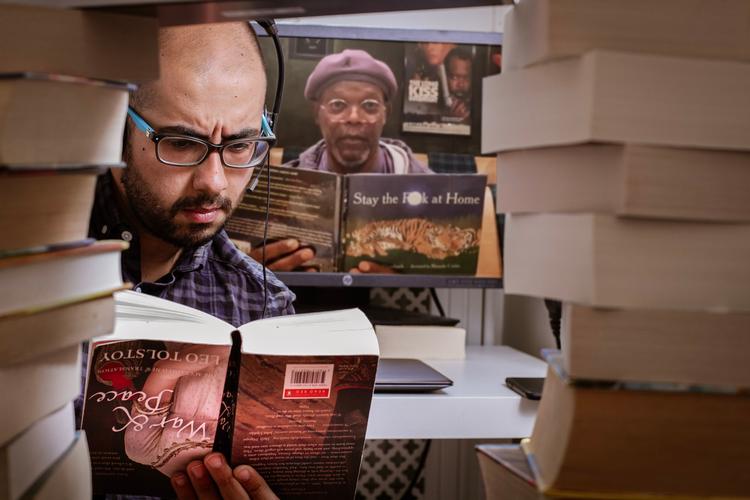 Before I write anything about this picture I need to state a couple of facts. Firstly, I don't read books (annoyingly). It's not my forte and I've only ever read a small handful of books in my life so all these books you see, including the book I'm holding (War and Peace) is my partner's. My fiancé is hands down the fastest reader I know, it's mind boggling. Just because I don't read books doesn't mean that they don't have their uses for me.. like the monitor I use as you can see in the background, is held up by books and this picture was framed by books. See? They have their uses for non-readers.

I also stole my fiancé's glasses for this which is unfortunate as she wasn't able to see for about an hour. Oops!

This image is one that I planned in advanced by drawing out some ideas out in a little book that I have to work it out in my head instead of doing what I've been doing a lot recently, which is just make it up as I go. I removed a large handful of books and created a couple of towers and purposefully held War and Peace upside down. Trying to get the framing right was really difficult because either the book want on show enough, I was out of the frame or I was just covering up the monitor too much but I got there in the end!